In the event where the women’s world record was broken, four Fairlands Valley Spartans members also completed the Chicago Marathon. 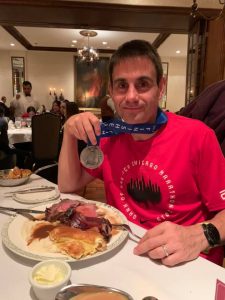 Starting temperatures were around 4 degrees, with the feels like being zero, it sure was a very cold one.

The sun did come out, but that only improved the feels like temperatures to four degrees.  Chilly winds off Lake Michigan certainly felt a little polar.

Stuart Haycroft led the Spartan charge with his first negative split in a very long time to finish in 2:54:47 with an almost 4 minute personal best (PB).

Todd Gray was racing just two weeks after the Berlin Marathon.  Pete Smith has a lucky number 3, with a finish time of 3:30:30.  Jackie Downes finished in a start line to finish line time of 4:35:44 with the timing mat missing her start.

A late result released by the Standalone 10K showed that Fairlands Valley Spartan ABBIE PEZ WON the female under 20 race.  Her time of 47 minutes 24 seconds was a personal best by five minutes and beat the second placed runner by more than six minutes.  She was 275th overall out of the 1336 finishers.

So Fairlands Valley Spartans won the female under 20 and women’s over 65 (Yuko Gordon) first prizes!

The town’s half marathon will be on Sunday 3rd November.  It’s been organised by Fairlands Valley Spartans since 1984.  More than 375 people had already entered by Wednesday 16th October.  The two lap route, including alongside the lakes in Fairlands Valley Park, follows the town’s famous cycleways and tarmac footpaths with the finish on Ridlins Athletics Track.

All proceeds from the Stevenage Half go to charity.  This is a community event organised by a voluntary local running club.  The charity for 2019 is Mind, the mental health charity.

On line entries are possible via https://www.activetrainingworld.co.uk/events/2019/11/03/Stevenagehalf

Train with the Spartans for the 13.1 miles event.  You can run with the club on Mondays, Tuesdays, Thursdays, Saturdays, Sundays and get discounts on many race entries together with the club’s free events.  Have a look at www.fvspartans.org.uk 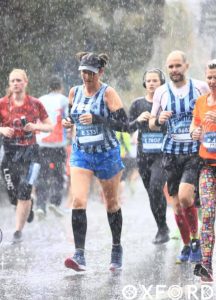 STEVE DOBNER said this was an overpriced disappointing half marathon with enough rain for Noah to float his boat!  He continued, “The course was exceptionally wet and very tight in places.  For such a beautiful city we hardly saw any of the colleges or sights, running up and down the Banbury Rd and Marston Ferry Rd which are not the most picturesque parts of Oxford.”  Steve finished in 2 hours 6 hours 6 seconds with new Spartan MO WARRILOW.  It was a three minutes personal best (PB) for Mo.

JONATHAN JONES run (or swim) time for the Oxford Half Marathon was 2.26.02

ED HARE did the Royal Parks Half Marathon in 1:51:38.  He managed to make use of carrier bags to avoid the muddy event village and although he had went feet set off on personal best pace but said he lacked stamina in the legs and struggled at the end.  Overall he was pleased with his time as he’s not done too many long runs recently.

Nick Kleanthous and Neal Muggleton completed the Tring 15K Ridgeway run.  This was a very hilly, wet, windy and muddy trail event climbing for the first two miles.  Both enjoyed it completing in 1:35:15 and 1:35:02.

Many Spartans were among the thousands of runners left shivering in the cold and rain for more than half an hour before they were told that that the Great Eastern Run, a half marathon in Peterborough, had been cancelled.  Several are hoping the organisers will at least provide a large marquee to give some shelter if there are similar conditions another time.

In Birmingham the half marathon was shortened by two miles.

JANE WHITROW says, “Rufus (her dog) and I did the Red Kite Cani Trail Canicross event last weekend.  Nominally ten miles but actually more than eleven in South Wakes.  Beautiful but brutal….  lots of hills, water and mud.  I managed to stay upright for the whole thing.  It was well organised, goody bag including reusable water cup at the start (nice touch and definitely needed).  Around 75 did the 22 mile distance and 75 did the shorter route.

Great weekend away and I would thoroughly recommend it but learnt the hard way that running in Hertfordshire and South Wales are quite different!!”

On the day that saw Eliud Kipchoge beat two hours for a marathon in Vienna 30 Spartans ran at eight different parkrun venues.

Dean Carpenter was sixth overall at Ellenbrook in a new PB of 18:41.

A total of 79 runners took part.

A total of 96 runners took part.