There was a great turnout of 46 Spartans, 21 women and 25 men, for the first cross country league race of the season.  The Sunday league launched with a three lap, approximately five miles race mostly on grass at Cheshunt. 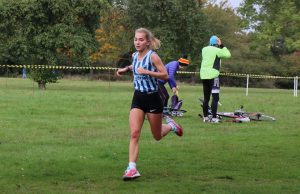 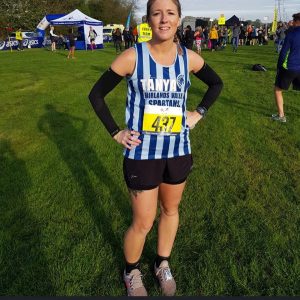 She said it was a bit of both path and grass trail.  Starting at the Lee Valley Centre and went along the river so no traffic and was good fast and flat.

Don’t Miss Out – The Stevenage Half Marathon Is Filling Up

The town’s half marathon will be on Sunday 3rd November so you can run 13.1 miles in Stevenage.  It’s been organised by Fairlands Valley Spartans since 1984.  More than 400 people had already entered by Sunday 20th October.  Three quarters of the available places have gone.  The two lap route, including alongside the lakes in Fairlands Valley Park, follows the town’s famous cycleways and tarmac footpaths with the finish on Ridlins Athletics Track.

All proceeds from the Stevenage Half go to charity.  This is a community event organised by a voluntary local running club.  The charity for 2019 is Mind, the mental health charity.

On line entries are possible via https://www.activetrainingworld.co.uk/events/2019/11/03/Stevenagehalf.  Entries will close on 31st October.

Train with the Spartans for the 13.1 miles event.  You can run with the club on Mondays, Tuesdays, Thursdays, Saturdays, Sundays and get discounts on many race entries together with the club’s free events.  Have a look at www.fvspartans.org.uk

John travelled to Oxfordshire Sunday to run the Abingdon marathon.  A fast flat course with about 500 runners and an amazingly supportive team of marshals helped him finish in 4:01.   71 done. 29 to go.   Watch this space for updates on his planned 100 marathons celebration for summer / autumn 2020.

He was just about out on his feet, not helped by the rain, at the finish of the York Marathon but ROGER BIGGS was pleased to sneak under six hours with 5:57:10.

The day was set for thousands of runners with perfect running conditions to run the 30th anniversary Great South Run in Portsmouth says SAM SIMMONS.

He ran a course personal best (PB) by 13 minutes and a 10 mile distance PB by 4 and half minutes.  During the race he managed to fly through the 10k to go my fastest time and carry on to finish with 1:22.05.  That rounded off a perfect day for such a great event.

GEORGIE HOOPER and NICK GILL ran the Endurancelife Sussex coastal ‘half’ marathon (13.75 miles, as advertised) in Dunwich today.  It was a relatively flat course for this trail series, but sand, mud and shrubbery meant it was tough going.  Nick said he had never felt so tired after a half!  He finished in 1:57:29 and Georgie in 2:11:19.  Georgie was 19th female and Nick was 34th male so, they said, “We’ll take it!”

It was a Spartan female one two at Stevenage and milestones galore this weekend.

All 46 Spartans at the Cheshunt Cross Country: