JAMES McSWEENEY was first Spartan.  He said it was a tough but fun course and was super pleased and surprised to get sub 1:50, and a PB by four minutes with 1 hour 47 minutes 33 seconds, on the hilly course especially as he flagged badly from around the 10 mile mark.

Next in was JIM BROWN, a week after the Bramley 20, in 1:51:18.  He was third in his age category and reckoned he got to half way in 57 minutes but back again in 54, maybe loosening up a bit as the event went on.  This was February and he got a race vest shaped suntan!  By finishing he completed a long distance series in the 2019 club championships.

An amazingly steady run gave ROS INGRAM a sub two hour time of 1:56:53.  She was the third Spartan to finish.

Another enjoyable day for TIM ROBINSON on his ninth consecutive Baldock Beast, he has done them all since they started.  Tim said he was going well up to mile 8 when the heat caught up with him.  He was 223rd in 2:00:29

ROB EVANS made his return to the half marathon distance at the Baldock Beast.  Rob’s target was to complete the course (and tame the Beast) and finished in 2:03:12.

The club’s next woman was JULIE SHADBOLT in 2 hours 6 hours 59 seconds.  She said, “What a lovely day and a great course.  I really enjoyed it.  ERICA GRAYSON said it was hot but great fun and social event.  She came in with 2:07:01.

(All 21 Spartan results can be found near the end of this release).

But the fastest Spartan Half Marathon of the weekend was in Berkshire.  SUZY HAWKINS ran the Wokingham Half Marathon.  She said it was a great event.  Suzy was aiming for the magic sub 90 minutes, but came in with 1:30:07.  Still very happy to take two minutes of her personal best (PB). 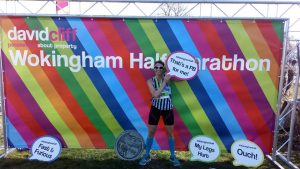 LIZ SMITH ran the Leicestershire Half Marathon in 1 hour 54 minutes and 8 seconds!  She said it was a nice course, but very windy at times.

DARREN and CLAIRE EMMERSON headed to Beyton just past Bury St Edmonds to run the Tarpley 10 on Sunday.  It was a glorious sunny day and the event is always well organised with lots of marshals to give support and encouragement.

Darren had a great run finishing with a chip time of 1:24:03.  This is the longest distance he has run in over two years because of the problems he’s been having with his knee so was very happy with the result.  Claire’s run wasn’t quite so successful.  She finished the 10 miles in 1:27:54 but would highly recommend the race

Tom at the Nationals

THOMAS SAUKA was 1,738th in 59 minutes 4 seconds at the National Cross Country at Harwood House, Leeds.  There were 2,006 finishers.

Record February temperatures saw 25 Spartans tackle 10 Parkrun events this week.  On the Blandford Course SIMON JACKSON was first home in a time of 17 minutes and 8 secondss, while a PB time of 22 mins and 14 secs was recorded for PAUL MAGUIRE in Stevenage, and of 24 mins and 6 secs for BARRY OSBORNE at the Westmill event.

JOHN HARRIS was 9th overall, in 20 min and 32 secs, at Ellenbrook Fields, while TIM SABAN was 10th overall on the Canons Park course in 20 mins and 32 secs. Letchworth saw JO BOWDERY and MARIA SWIFT finish as the 2nd and 3rd ladies, respectively, with times of 23 mins and 27 secs and 23 mins and 46 secs.  In Ipswich JOHN ROXBOROUGH ran his 90th event in 23 mins and 02 secs.

YUKO GORDON celebrated her 68th Birthday at the Spartans’ Saturday morning track session.  The training sessions at Ridlins Track, Woodcock Road are free for all members of Fairlands Valley Spartans.

Fairlands Valley Spartans are into week eight of their marathon training plan.  Are you running a Spring marathon?  Whether you want to get round and enjoy; are a first timer; want a personal best or expect to go “Sub Three” the Spartans are the local club for you, there are group training opportunities five days a week.  Have a look at www.fvspartans.org.uk or the club’s Facebook page.

21 Spartans at the Baldock Beast