Fairlands Valley Spartans celebrated what everyone achieved in 2018 at their presentation evening at the Cromwell Hotel on Friday evening.

Club Chair SOPHIE COWAN said it was a busy year, seeing a full set of Mid Week League, cross country and EMAC (East of England Veteran) fixtures as well as the usual mix of track, 5ks, 10ks, half marathons, “20s,” marathons and an increasing number of ultras.  The year saw many new members and countless personal bests and first runs at different distances.

After looking at all the results in the short and long distance championships for women and men it was revealed that the overall club champion for 2018 was YUKO GORDON.  The top three winners in each category:

The Overall champion (Combining Long and Short) for men was GRANT RAMSAY and for men was YUKO GORDON.

With high scores across all distances the amazing YUKO GORDON was overall club champion.

NICHOLA DURENT was starter of the year

Moving on from the race based trophies the Captain’s Awards went to TIM ROBINSON (male) and CALLIE CHAPMAN (female).  The Head Coach award was won by PETER SMITH and the President’s Award by PAUL HOLGATE.  TIM ROBINSON also won the Chair’s award and the Spartan of the Year, decided by a poll of members, was SOPHIE COWAN.

SIMON JACKSON did the Cambridge half marathon on Sunday in 1:16:39.  As always it was windy, some surprising lumps and twisty but this year there was wind and rain too.  He was third in the 40 -44 age group.

STEFFAN FORD used it as a solid training run ahead of Boston marathon, after his hard effort session on Friday evening.  He did 1:23:39

CAROLE SHELDRICK ran the Cambridge Half for the first time in 2017 and was slightly disappointed at missing her sub 2 hours target by completing it in 2hrs and 3 seconds.  On Sunday she was able to go back and try again for that sub two which she’s pleased to say she achieved, finishing in 1:57:45.  Luckily Storm Freya held off until after runners had finished in Cambridge.

ED HARE really enjoyed the Cambridge race.  He said it was a perfectly flat and fast PB (personal best) potential filled route.  Ed was delighted with a 5 minutes PB of 1 hour 50 minutes 46 seconds.  He said he felt strong from the start and kept to the race plan consistently picking of the miles at 8.30 minutes per mile pace, and although he kept thinking the tank was going to empty very quickly at some point, it didn’t and he ran his two miles at the end of the race. Delighted!

MARIA SWIFT finished the Cambridge Half in 1:58:50.  She was delighted with a sub 2 hours as she’d not done a road race for a long long time.

KEN JUDE said, “The weather at Cambridge wasn’t as horrible as forecast a day or two earlier, just damp and drizzly, so not too bad for anyone in good shape.  Mine was, I think, my slowest half to date. Never mind, hopefully there will be another day. Started OK but I just didn’t have it after 5 miles, so came in in a very tired 2:02:51 according to the official result.”

“Manchester here I come” said MARTIN BLACKBURN after running under 1:25 at the Cambridge Half Marathon.  In the words of one of his favourite signs in the race “pain is temporary internet results are forever!”  His 1 hour 24 minutes 26 seconds means a sub three at the Manchester Marathon is possible. 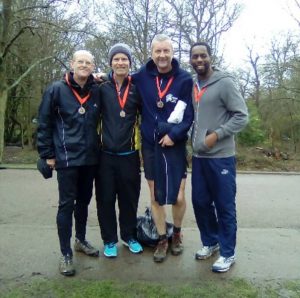 In strong winds and light rain, the course led the Spartans through water logged commons, undulating ground and extremely muddy woodland (including several water crossings, which were successfully jumped over by everyone).  All enjoyed the challenges and were delighted about their achievement.

All That For Seven Seconds!

The Berkhamsted Half Marathon is far from flat with tough climbs at three, seven, ten and twelve miles.  Constant rain, wet roads and the arrival of Storm Freya added to the usual challenge and character building experience.

JIM BROWN said the combination of hill and biting head wind almost brought him to a halt at ten miles and commented there water right across the road in places.  Predictably he ran a negative split for the second week in a row.  Finishing with a last mile that he said was almost too fast, mile thirteen was more than two minutes faster than mile three, he finished in 1 hour 51 minutes 11 seconds, his best time this year by seven seconds and good enough for second in his age category.  He commented, “All that for seven seconds – that was really hard work.”  Jim made into the top half at 467th out of the 1011 finishers.

CLARE HYDE said this was the first time she had raced in the rain, no half measures there then.  She came in with 2 hours 12 minutes 7 seconds.

PENNY SCHENKEL tackled the Berkhamsted Five Miles event and was pleased with her time of 46 minutes 15 seconds.  She was 203rd out of 507.

Tom at the Kanter

THOMAS SAUKA did the Chiltern Kanter.  Organised by the Beds Bucks and Northants LDWA this was a challenging 26 miles of self navigating.  It was Tom’s first time but he enjoyed himself, even in the mud and rain.  It was also his first marathon of 2019.  He finished in 5 hours 50 minutes.

TREVOR and KAREN BROOM travelled to Kempton park race course to run the Kempton park chase.  The 5K loop is round the race course and is completely flat.  There was a choice of 5K, 10K and half marathon distances.  Trevor ran the 10K and finished in 1 hour 3 minutes 53 seconds and Karen ran the half marathon as part of her 16 mile training run as part of her London marathon training.  She finished in 2.20.30.  As it was really wet and windy they were both really pleased

Karen Liddle, Tricia Hopper and Barry King ran and completed the Belvoir marathon in Lincolnshire on Saturday 2nd March.  The route was all off road taking in surrounding villages and was very, very hilly!  They all finished together in 6.39.14

PAUL MAGUIRE ran the North Herts Road Runners First Saturday of the Month 5k run on Norton Common.  It was a muddy and slippery two-lap course and he finished in a time of 22:02, a new course PB.  He was 14th out of 111 runners.

Even though the FVS presentation evening was on Friday evening that didn’t stop Spartans getting out and donning their stripey vests for the first Stevenage parkrun of the month.  Congratulations to Nick Gill who completed his 50th parkrun and was second Spartan man in 20:50.  Danny Scanlon was first Spartan man in 20:28 and 10th overall.  Jenny Garrett ran a new PB of 25:46.  First Spartan lady was Claire Pullen in 23:37.

John Roxborough was 8th overall at Westmill in 23:57.

Coming back from injury Rowena Rutledge ran Gunpowder in 32:56.

Tracy Stiles was up north running Darlington PR for the first time.  Her time 32:13.

Fairlands Valley Spartans are into week nine of their marathon training plan.  Are you running a Spring marathon?  Whether you want to get round and enjoy; are a first timer; want a personal best or expect to go “Sub Three” the Spartans are the local club for you, there are group training opportunities five days a week.  Have a look at www.fvspartans.org.uk or the club’s Facebook page.

If you are running the London Marathan, there are still places available on the Spartans coach which will leave from the Old Town early in the morning. To book a place on the coach please contact Roger Biggs at roger@thebiggs.net or by phone on 07748 326301.

A total of 78 runners took part.