The big, big news is that Fairlands Valley Spartans have a new world record holder.  SIMON JACKSON broke the world indoor Ironman triathlon record in Stevenage town centre on Saturday.  (For more on that see the Comet story). 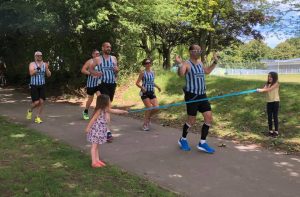 Ed said, “The week started with a 10 mile sunny Monday evening run and then got gradually tougher as the week went on.  Everyday was like a very long recovery run and the toughest part was to get myself back out there each day, despite my body wanting to rest.  I was lucky enough to have some great Spartan company for most of the runs but it was amazing to have my children hold the finishing tape in Fairlands Valley Park on Sunday morning.  Thanks to everyone who supported me this week, I truly couldn’t have done it without you and as for the runners who have completed the actual event within 24hours, massive respect!!!”

Ten Spartans raced in England Athletics national 5K championships.  These were raced virtually between 11th and 13th so most Spartans ran in or near Stevenage.

With nearly 1600 results in BRIAN WHITE was second in his category with 19 minutes 13 seconds.  The fastest Spartan was MARTIN BLACKBURN with 19:08.  The fastest Fairlands female was CHARLOTTE SMITH with a personal best 21 minutes exactly and the fastest FVS junior was WILL MORLEY with 20:32.

Remember most of these runners were in different places and could not see each other.

Fairlands Valley Spartans are well on the way to Kadoma on their virtual quest to visit all of Stevenage’s four twin towns.

They covered 304 miles on Saturday with 58 members posting a distance.  Brilliant support for Spartan Simon Jackson and his world record attempt.

By Sunday morning the total distance covered was 10,767 miles in 41 days.  Then 51 members recorded a further 413 miles on Sunday to which was added the 321 bonus weekly miles from members not on Facebook.

So they are now close to Lusaka in Zambia with 11,501 miles covered in 42 days and less than 500 miles from their target, the fourth twin town, Kadoma in Zambia where in true Spartan tradition they are expecting a very big buffet.

Parkruns have restarted in some other countries but not yet in the UK.

Fairlands Valley Spartans and many others are looking forward to the 200th Stevenage Parkrun which will be the first local parkrun when the events can restart.  The 199th parkrun was on Saturday 14th March.  It’ll be some party when they restart.

A side effect of virtual racing is that you can be taking part in more than one event with the same run.