Sharon and Liz Crowley have been running and walking along the backbone of England, well at least virtually!  The pair have just completed the Montane Spine Challenger, 108 miles on the Peninne Way from Edale in the Peak District to Hawes in the Yorkshire Dales. They completed the event well before the cut off which was the end of January! 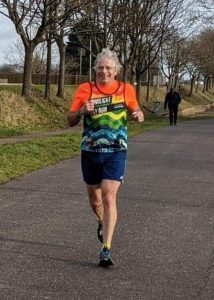 Early morning snow followed by slush on Saturday morning made conditions difficult for fast times in our part of the world but five Spartans were determined to record qualifying times by the 12 noon deadline.  They were NICK KLEANTHOUS 26:12; JIM BROWN moving up from third in his category last week to second this time with 29:18; PENNY SCHENKEL running her tenth Fly 5K in 30:29; PAUL HOLGATE 30:35 and LIZ CARVELL 30:54.  There were 229 finishers from 44 clubs, many in and around Hertfordshire but others from much further away including Hampshire, Devon, Cornwall and Sydney, New South Wales.  Nick was 103rd, Jim 142nd; Penny 160th; Paul 164th and Liz 30:54.

Then it was a lovely calm sunny day on Sunday with many Spartans enjoying long training runs in ones and twos…..

As well as the Fly 5Ks several other 5K times were recorded in (not) Parkruns which do not have to be run on Saturday morning.  On Monday Jim Brown and Nick Kleanthous ran 5K in 25 minutes 21 and 25:35.  On Tuesday NICOLA ANDERSSON ran 5K in 27:22 and on Friday HELEN FOUCOURT took 38:51.  The additional Saturday runners were MARIAN MORLEY in 27:48 and PAUL JENNINGS in 28:18.

Virtually nothing stops Fairlands Valley Spartans and they have now run nearly 15,000 miles in their race across North America.  Lockdown 2 – Briefly Tier 3 – Now Tier 4 and they continue into 2021.

Having covered the USA they have started the Trans-Canada highway route and are now leaving Val-D’or and heading for Thunder Bay and a visit to Lake Superior .

On day 71 the Spartans completed 330 miles with 62 members posting a distance.  Their total distance so far is 14,604 miles.

BRIAN WHITE, Spartans Head Coach, is coming up with some fresh challenges to keep Spartans motivated and running during the new lockdown.  The first one is to improve 5K times over a four week period.

There are five sessions a week starting with a benchmark 5K; hill technique; recovery run; interval set; and easy time on feet longer run but continuing with different sessions each week.