Clearly three Spartans had been longing for a real race, or the lock down training had been really effective.

Despite thick fog and near freezing conditions STUART HAYCROFT easily beat 40 minutes with 38 minutes 15 seconds; JIM BROWN ran his fastest 10K for almost two years and beat what he thought was an unachievable target for this year, sub 50 and an age related score over 70%, with 49 minutes 21 seconds and PAUL HOLGATE ran a season’s best 59:49, a big improvement to get under the hour for the first time in 2020.  Jim was fifth man 60 plus; Stuart eighth man 40 plus and Paul eighth man 60 plus.  There were 181 runners in this Covid secure but timed and accurately measured event. 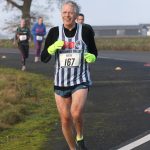 And the Spartans have been active in many virtual races, you run the distance but time yourself and submit it to the organisers.

The 25th (not) Stevenage ParkRun brought out JAMES McSWEENEY 25:15 and JIM BROWN 27:00 in addition to those who ran the Fly event.  While Fly 5Ks have to be run on a Saturday morning (Not) parkruns can be run any day of the week.

JENNY GARRETT and VICKY ARCHER ran the Virtual Hatfield Five Mile race on the day the event would have taken place.  Jenny finished in 47:25 and Vicky in 47:30.  The real race has been postponed to Sunday 27th December.

Running in the USA

Lockdown Take Two did not stop Fairlands Valley Spartans running and they are going to keep running across the USA until New Year’s Eve.

On day 31, Sunday, they completed 394 miles with 54 members posting a distance.  The Spartans are now heading for Florida.  They completed the La Fayette, Baton Rouge and New Orleans Marathons yesterday.  The next marathon is the Gulf Shores.  So far they have run a total of 6821 miles in their virtual relay.

NIKKI WILBY now has more than fifty entrants in her hard soft motivator.  Run 5K or 5 miles on tarmac in November then see how close you can get to matching the time cross country in December.  Times up for the November on road qualifiers.  Now it’s time to get muddy.

PAUL HOLGATE was out there on the first day possible, 1st December, to run his Virtual Stevenage Cross Country five miles in 59 minutes 33 seconds.