The previous record 16 minutes exactly had been held by Callum Stewart since 18th August 2018.  Jonathan improved on the 16:13 he ran in February this year to beat that by three seconds.  Appropriately he was running at the Olympic Park.

The Spartans were in action at three other “real” races on Sunday.  All were on Debden Airfield with club members in the 5K; 10K and half marathon.  These were the postponed Essex Remembrance events.

Not the greatest conditions greeted the Spartans arrival at Debden Airbase with plenty of rain in the air.  A well planned, Covid secure, start saw them called forward in sixes by their bib numbers as they set off in small groups at 20 second intervals.

The course was mainly flat with a few minor slopes, the major obstacles were the giant, and deep, puddles covering the width of the track at around 4K & 8K.  DAVID PATTMAN ran a new personal best in the 10K.  His 44:06 was a 1 minute 9 second improvement on his previous 45:15.

STEVEN DOBNER was surprised to find at 8K that he was on target to be close to his personal best as he had set off just running to how he felt with no time in mind.  Having noticed the opportunity he upped the pace in the final 1500 metres to sneak a new personal best by nine seconds with 48:41.  Extremely surprising having been out with an ankle ligament injury for a month in September/October and the race being his first since the pre covid days!

Paul and Alison SHELLEY ran the Essex Remembrance Run 10K.  They said it was very cold, wet and windy, but they finally got to wear real race numbers again, and the start was well organised and socially distanced.

YUKO GORDON ran the 5K.  She said she was lucky as it was still dry and added, “I liked the flat open course but I needed better awareness of the 6×6 start.  The five others in my wave were young and fast, my initial rhythm was messed up, over paced and I lost it. I was glad it was only 5K.”  Nevertheless she still won the women 60 plus category in 23 minutes 19 seconds. 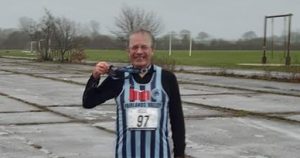 The weather well and truly arrived for 1p.m. and the start of the half marathon on Debden Airfield.  With next to no shelter the wind howled across the course and it was a battle to keep moving let alone “sprint” for the last 500 metres.  The race consisted of three laps, each just over seven kilometres.  Lap one wind and rain; lap two just wind; lap three wind getting stronger and rain back.  Not a steeplechase but runners had to negotiate a watersplash through a flood on each lap.  With the conditions it was almost dark for some of the slower runners as they battled their way across the finish line.  JIM BROWN said it was hard but a big thank you to the organisers, ATW, for finding a Covid secure way to let runners race.  Not quite what he wanted but 1 hour 53 minutes 23 seconds was not bad in the circumstances.

John Harris ran the “Twas the run before Xmas Off road Ultra” at Horseheath Racecourse in Cambridgeshire.   He covered 36 miles in 6 hours 8 minutes in very muddy and wet conditions.  He ran the furthest of all the competitors, eleven laps and a new ultra course record.

Running in the USA

Lockdown Take Two did not stop Fairlands Valley Spartans running and they are going to keep running across the USA until New Year’s Eve.

NIKKI WILBY now has more than fifty entrants in her hard soft motivator.  Run 5K or 5 miles on tarmac in November then see how close you can get to matching the time cross country in December.  Times up for the November on road qualifiers.  Now it’s time to get muddy.