Fairlands Valley Spartans organised the Stevenage Half Marathon and it was a tremendous community event with nearly 500 people running round the town, dozens of Spartans volunteering to make the event a success, a local Spartan winner, hundreds of spectators around the course and still 29 members of the club racing and doing well. 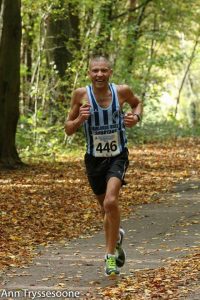 Spartan GRANT RAMSAY won the race in 1 hour 17 minutes 26 seconds with the club’s team of Grant, STEFFAN FORD 1:24:16, BRIAN WHITE 1:28:23 and ADRIAN BUSOLINI 1:29:21 taking the team honours.  Grant was also the first finisher aged 40 plus and Brian second 60 plus finisher in the open race.

The event included the Hertfordshire Half Marathon Championships for veteran runners.  Grant took GOLD.  BRIAN WHITE took GOLD and JIM BROWN 1:46:31 BRONZE in the 60 plus category.  ROB SHAW won BRONZE in the 70 plus contest.

The Spartan veterans Grant Ramsay, Steffan Ford; Brian White and Tim Saban in a new personal best of 1:31:25 won GOLD in the county team event.  The club’s women were not being left out as ROS INGRAM 1:54:22, JULIE SHADBOLT beating two hours for the first time with 1:58:48; and ERICA GRAYSON 2:02:29 made up the SILVER medal winning team.

Many other Spartans had great races.  NICK GILL put in a huge effort on the undulating course to take ONE second off his personal best (PB) which is now 1:37:53.  There were also personal bests by KAREN ELLIS 1:51:48 and JO BOWDERY 1:57:44.

Massive thanks to SOPHIE COWAN, race director and her huge team of volunteer race makers.

Spartan Results at the Stevenage Half Marathon

There were 468 finishers.  Results for everyone can be found on http://eventchiptiming.com/

Six Spartans travelled to Portsmouth for the Great South Run.  Racing over ten miles and with a big field RUTH REILLY ran a tremendous new personal best of 1 hour 14 minutes 44 seconds.  JENNY GARRETT was rewarded with a new 1:29:59 PB.  LIAM HERBERT was the club’s fastest finisher with 1:08:52.

In a very windy Abingdon Spartan ANDREW PATTERSON cut his marathon personal best (PB) by five minutes to 2 hours 42 minutes 20 seconds.  That gives him a championship start at the London Marathon.  SUZY HAWKINS cut her PB to 3:21:50.

CAROL PAUL ran the Toronto marathon.  On a hot day for the time of year where Carol suffered in the heat Carol completed the marathon in 4:39:35 her sixth marathon in Canada and her 355th marathon.   Carol ran her first marathon 25 years ago at Snowdon.

Fastest Spartan parkrunner of the week was RICHARD KENNEDY who was 7th finisher in 22:45 in the inaugural event of Nobles parkrun on the Isle of Man.