BRIAN WHITE won GOLD for men aged 60 plus with a fantastic 31 minutes 21 seconds.  He says he has room for improvement!  This year he has won County Gold at 5K, 5 miles, 10 miles and half marathon but only silver in the 10K!  Then BARRY OSBORNE made it a Spartan one two by taking SILVER in the same category with 32:37.

Women and men of all abilities are very welcome.  Fairlands Valley Spartans offer training sessions on five days every week including free to members coached sessions at Ridlins track on Saturday mornings.  The club is affiliated to United Kingdom Athletics giving access to hundreds of events and competitions every year. 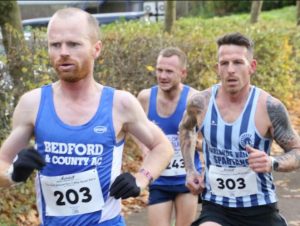 The first five mile race of the weekend was the Wolverton Five at Milton Keynes on Saturday.  CRAIG HALSEY cut his personal best by over a minute to finish tenth in 26 minutes 25 seconds.  Yuko Gordon won her age category with 36:48.

Kerstin Weiner has now run a personal best (PB) at every standard road race distance this year.  She finished with ANDY PRIOR in 40:53.

PAUL HOLGATE’s 47.30 shows he is continually improving after his accident.

The Wolverton Five is held on a Saturday afternoon, 250 participants, relatively flat course which is fast as long as the wind doesn’t whip off the lakes – it was a bit cold though!!

It was bright and breezy for Sunday’s Bass Belle ten mile race at Bassingbourn.  Spartan GRANT RAMSAY beat the hour and was third out of the 370 runners in 59 minutes 6 seconds.  TOM SAUKA was next in with 1:11:52.

The fastest female from Fairlands was RUTH REILLY in 1:13:34 with MADDIE PRITCHARD not far behind in 1:15:57.

Mild and still conditions encouraged some great runs in Hyde Park on Friday.  MADDIE PRITCHARD recorded 21 minutes 17 seconds for the Serpentine 5K.  There were 249 runners in the lunch-time event.

ROGER BIGGS ran the Owler Marathon on Sunday.  This was a multi terrain marathon from Ashford Athletics Track with two laps set in the surroundings of Conningbrook Lakes Country Park, and the quiet roads of Brook.  A combination of quiet roads, tracks and muddy paths.  Roger Biggs completed the two laps in 5:46:17.

It was a quiet week for parkruns with a number of Spartans lining up in the Bass Belle 10 and Hatfield 5 races the following day.

The quickest Spartan parkrunner of the week was ASHLEY SCHOENWETTER who was first woman to finish at Stevenage in a new course PB of 20 mins 34 secs.  JO BOWDERY also finished in the top 10 running with her dog in 24:31.  DAVID SCOTT was first Spartan man to finish in 24:32 with CHRIS HOLLAND also running sub-25 despite stopping to help a young lad who was in a collision with a cyclist, the lad then bravely continuing to finish in front of Chris!

VERITY FISHER was second woman at Torbay Velopark in a time of 23:18.  Last week’s furthest away parkrunner got even further.  Now in New Zealand PENNY SCHENKEL ran the Hagley Parkrun, Christchurch 11,763 kilometres away in 27 minutes 6 seconds.