An incredible 45 Spartans were in Scotland to run in the Edinburgh Marathon Festival.

Much kinder conditions than the recent London and Milton Keynes Marathons, a great course and effective preparation with the Spartans coaching team and training groups helped many to achieve fantastic new personal bests.

KAREN PALMER was buzzing “I only blooming did it new marathon PB at Edinburgh 4.23.33.  I nearly deafened myself ringing the PB bell.  Fantastic being with such a great group of super Spartans today. So lucky to belong to such a great running club.”

STEFFAN FORD said, “SIMON JACKSON and myself raced Edinburgh Marathon.  On an overcast morning with some strong coastal winds it made a change from the recent hot weather I experienced at London and was 20 minutes quicker.  We both smashed our Marathon PBs in achieving a top 100 finish.”

CALLUM STEWART was top ten out of more than 10,000 finishers in the Edinburgh Half Marathon.  He was eighth in an impressive new half marathon time of 1 hour 13 minutes 15 seconds. 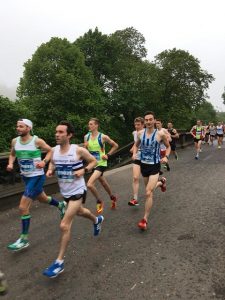 Spartan press officer JIM BROWN commented “45 Spartans crossed the border by train and plane to race round Edinburgh and East Lothian.  What a great weekend and achievement for Fairlands Valley Spartans from Stevenage!  In just one week the club notched nearly 140 different race results from experienced Spartans encouraging Starters round their first Mid Week League race to some spectacular performances in Scotland and winning in the British Masters Mile.”

ASHLEY SCHOENWETTER was fastest woman from the club with a new personal best (PB) of 42 minutes 21 seconds – a 57 second improvement.  YUKO GORDON won the women over 65 contest with an incredible 45 minutes 20 seconds while MARIE COLUCCI is back, third Fairlands female in 48:23.

DAN McALPINE headed up the men’s “A” team with 34 minutes 17 seconds and fourth out of the 436 finishers, that was up 42 on the first fixture in Epping Forest.

Opportunities to run the classic middle distance race, the mile, are rare these days.  Spartan YUKO GORDON grabbed the chance and WON the British Masters Mile Championship for women 65 plus in 6 minutes 38 seconds.  ANDREA WESTCOTT was seventh in the 45 plus category with 7 minutes 58 seconds.

ALISON SHELLEY is new to the Spartans having joined just a few weeks ago.  She took part in her first ever 10K run on Sunday 20th May at Wimpole Estate and finished in one hour and 54 seconds net.

Starting slowly following his 10K effort the night before JIM BROWN completed the Serpentine Last Friday of the Month 5K in 25 minutes 28 seconds.  He was third in his age category.

Tired for his third race in four days JIM BROWN still managed to take 28 seconds of his year’s best time at the Hatfield Broad Oak 10K on the Bank Holiday Monday morning.  He said, “I was hurting at 2K and thought it was all going to end in tears but helped by a fantastic flying final 1.5K all ended well and I was pleased with 49:22.  Finishing at a village flower festival meant I was straight in the tea tent.”  PAUL HOLGATE finished in 56:02.  There were 1,115 finishers.

ERICA GRAYSON ran Monday’s Vitality 10000 in 61 minutes 44 seconds.  She said, “It was a great London course.  Very busy and congested in parts but all the same very enjoyable with friends.  I was very happy with my time eight days post Windermere Marathon and in the heat.”

Further afield, first time attendance was recorded for JOHN ROXBOROUGH at the Heartwood Forest event in 22 mins and 4 secs, and MICHAEL O’KEEFE at Cassiobury in 26 mins and 53 secs.  NATALIE LAWRENCE was the fourth woman to finish at Houghton Hall in 18 mins and 56 secs. DANIEL SUTTON and VERITY FISHER attended Moor Valley and ran 38 mins and 36 secs and 48 mins and 6 secs in turn, while at Panshanger THOMAS SAUKA finished in a time of 21 mins and 5 secs.