Nine Spartans enthusiastically grabbed the opportunity of the first real race of the year which was just down the road in Hertfordshire.  Five achieved new personal bests.  They ran the St. Albans 10K, a wave start socially distanced event, but a race nevertheless.  Fairlands Valley’s SIMON JACKSON cut his 10K personal best (PB) by 70 seconds with in an outstanding 33 minutes 39 seconds for a top ten finish, ninth out of 540, and third male 40 plus.  Simon said it was lovely to race again.

ANDREW PATTERSON was in the top twenty.  19th with 34 minutes 13 seconds.  A PB improvement by 49 seconds

Everyone got into the UK’s top 500 rankings as this was the first licensed 10K race of the year.

There were two big starts with seven Spartans off at 9a.m. and two at 10.15a.m. and little waves within the big starts.  540 finishers.

Saturday was day two of “real” races and Fairlands Valley Spartans were at two marathons. 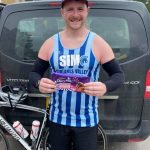 At Dorney Lake ADRIAN BUSOLINI ran a new personal best of 2 hours 50 minutes 9 seconds and was 98th out of the 444 finishers.  SAM SIMMONDS had a great run.  Sam said, “It’s been a whole year of training and keeping focussed for a marathon as I missed out on my target sub 4 hours by 3 minutes.  I ran the Dorney Lake marathon. It was so well organised rolling starts everything was social distanced as well to make things safer. So lucky to have James Kilroy filming live and other Spartans there running around the course.  I ran a new PB of 3:26:31.” 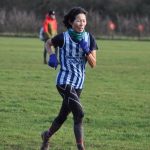 Meanwhile GRANT RAMSAY was running his 50th marathon and 46th under three hours at Kempton Park.  His 2:56:13 won him the men 45 plus category and he was sixth overall.

This race increased Grant’s sub three hour time span to 22 years, with his first “sub 3 marathon ” dating back to 1999.  He said it was a good first race back following the recent COVID restrictions.

While they couldn’t hold their presentation evening and dinner due to pandemic restrictions past chair Sophie Cowan chased around Stevenage to make sure four special awards were presented.

She said, “Whilst 2020 was a year that many will want to forget, there were some amazing club achievements.  Here are a few highlights – this is not an exhaustive list! 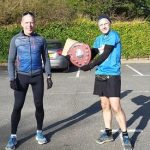 Michelle Reeves, Gail Mackie, Suzy Hawkins and Ella May Hard completed their marathon relay in 2:54:43 in April 2020 with the handovers streamed for us to watch.

Jonathan Parr broke the club 5K record at the Milton Keynes 5K in March 2020, recording a time of 16 minutes 35 seconds.

All the members who contributed miles to the marathons of the world!

Without further ado, the award winners for the year were:

Steph started running in lockdown 1 and completed the couch to 5k in her garden! Since joining FVS, Steph has become a regular at Monday, Tuesday and Thursday sessions. Steph clearly loves her running and that enthusiasm is contagious. Congratulations Steph.

Jim has been an FVS member since 1992.  He has been Press Officer since 1996, 25 years, and first joined the Committee in the last century.  Jim has been involved in coaching and leading groups for many years and got his first coaching qualification in 2010.  Jim’s commitment to the club is apparent. Over the lockdown, Jim has worked tirelessly to keep a flow of Spartan news in the press – no easy task.  Thank you for your commitment to FVS Jim.

This year’s Head Coach award goes to Tim for all his work on IT and coaching groups behind the scenes.

The 2020 Spartans’ Spartan of the Year is very well deserved. Thank you for all the planning behind the scenes involved in getting the pod sessions back up and running and for posting daily challenges and keeping everyone motivated over lock down 1, 2 and 3!

Due to the very disrupted race calendar the 2020 and 2021 club championships will be combined.

While their relay race round the Americas finished last week fourteen Spartans continue their virtual race around England.

The Fairlands Valley Spartans team have already covered a total of 14,751.7 kilometres and are now scattered between Cornwall and Yorkshire.

PENNY SCHENKEL has built on the lead she took two weeks ago and well up the east coast at Filey in Yorkshire.  She is 1,854 kilometres into the 2,970 kilometre event.

It is so bracing for JIM BROWN who has reached Skegness after battling a chilly north wind.  His 1642 kilometres means he’s taken second place by 29 kilometres.

BRIAN WHITE is also well past half way.  In third place with 1,613 kilometres he is approaching Boston in Lincolnshire.

SHARON CROWLEY is in the Suffolk Coast and Heaths AONB and fourth with 1362.

Next come three Spartans with just over 1,000 kilometres.  They are HAZEL SMITH, fifth in Folkestone with 1,071; CATHY CRAIG up to sixth just past Rye and into Kent with 1,040 and KEN JUDE, seventh on 1,021 at St. Leonards.

PAUL HOLGATE is in Emsworth, ninth with 883 while a 127 kilometre week has shot JON SYPULA into the top ten with 792.

The event, the Virtual Coast of England Challenge started in Bristol and Fairlands Valley Spartans together with many others are running, walking or cycling 2,970 kilometres anti-clockwise round the coasts and borders of the country.

TRACY PEZ (744 approaching West Lulworth); LIZ CARVELL (707 in the West Dorset Heritage Coast); WENDY THARANI (577 in the South Devon AONB) and LEE PICKERSGILL (482 near Caerhays Castle) continue their pursuit though will have to accelerate a bit if they are going to be in the pack for the finish..

If not they are well on target to be back in Bristol by the end of the year.

And Saturday 3rd was the first of the month and Stripey Saturday when the Spartans have donned their club kit for Fly 5K, (not) parkrun and training runs since before the pandemic.  Something they’ve kept up throughout the restrictions.

Club numbers were down a bit in the Fly 5K possible due to the restart of real races and the Easter weekend but some enjoyed the virtual 5K motivator.  Having raced the previous day JIM BROWN was content with 28:26 which gave him second in category.  PENNY SCHENKEL 30:32.  PAUL HOLGATE 32:09 and MARIAN MORLEY 47:06.

The virtual Fly races started during lock down to help keep people active.

In addition to those using the same effort to record Fly 5K times on Saturday JIM BROWN recorded 26 minutes 12 minutes in the first half of his 10K run on Friday so that gave him a (not) parkrun time. .  NICOLA ANDERSSON ran 29:36 on Wednesday, THOMAS SAUKA 21:12 on Saturday and ALISON SHELLEY 24:12 on Sunday.

Group Runs Are Back

The return to club training went really well helped by some glorious evenings.  Members have to book in advance to keep the numbers within Covid guidance and there are several starts at different places around Stevenage.