In a club participation battle the Fairlands Valley men nosed in front this time with 21 finishers compared with 20 women in the fifth and final cross country league race of the season.  Some loved it but there’s no doubt it was tough on Therfield Heath Sunday morning.  The hills are always there but this was the coldest race of the season to which was added rain, wet ground and a strong wind on exposed parts of the course. 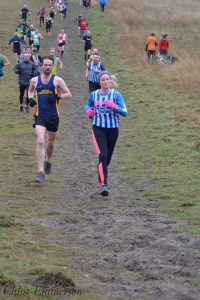 MICHELLE REEVES was the highest placed Spartan.  She completed the nine undulating kilometres in 44 minutes 47 seconds top be twelfth woman.  YUKO GORDON won the women aged 65 plus category in the series.  In this race she was 21st woman in 47 minutes 27 seconds.  ISABEL GREEN 29th in 48:17; KELLY EVANS 60th in 54:05 and ALICE POOLE 64th in 54:36 completed the women’s “A” team.

Overall the Spartans were fifth out of the twenty clubs in the league.

On Sunday SU McANENY ran the Love Welwyn 10km with husband CIARAN.  She said it’s a nice local run that was well organised.  Despite the wind, wet and cold conditions she managed a new personal best (PB) of 52:24, which made her really happy!

NIC PATTMAN completed her first ever 10k run on Sunday morning at the Love Welwyn 10k.  This is also her first run in her stripes since joining Fairlands Valley Spartans in January.  She said, “Never did I think I would be able to run this distance so I am extremely pleased and grateful to all the Spartans for their support during both training sessions and the run today.”  She finished in 63 minutes 22 seconds.

TREVOR and KAREN BROOM were with the fourteen Spartans who ran.  It was the second time they’ve both ran this event.  This time the route was reversed but they both got a course PB.  Trevor finished in 1.05:55 which was a course PB by 13 minutes.  Karen finished in 1:02:31 which was a 5 minute course PB.

ASHLEY SCHOENWETTER was the Spartans fastest runner.  She was the fastest woman aged under 40 and her time of 40 minutes 39 seconds gave her 18th overall out of about 400 finishers.

JOHN HARRIS was second man aged 50 plus with 41 minutes 52 seconds.

ERICA GRAYSON said, “The rain stopped and even the sun managed to shine a little on those at the Welwyn Love 10K.  A group of Spartans spread the street love taking on the undulating 10K course around the streets close to Stanborough Lakes.  The first mile was congested with runners but once the field thinned the narrow foot paths provided a solid footing before the last 1K hit the path around the lake.”

This was Erica’s first official race this year and her last race as a 49 year old.  She finished in 53:43.

(Times for all fourteen Spartans can be found towards the end of this release).

ROGER BIGGS ran the Darwin Day Marathon on Friday.  This was a marathon to celebrate the life of Charles Darwin in his town of birth.

The event was held in the Shrewsbury Sports Village on a purpose built cycle track, just under 1km long.  For the marathon distance, this meant 43 full laps, plus an initial shorter lap.  Each lap finished with an uphill section, producing a 7 metre incline each lap, and 306 metres of climbing overall.

Looking to get under 5.5 hours, Roger was on course for much of the race, but had to walk the last seven laps after bad cramps set in on both legs.  The race director kept the race open, and Roger managed to finish in 6:27:50 and got his finisher’s medal.

“Charles Darwin’s book The Origin of Species was a scientific bombshell in its day and remains a much-discussed work 150 years later.  Darwin was the official naturalist aboard the British ship H.M.S. Beagle during its world voyage of 1831-36.”

Double celebrations in Stevenage this week as Verity Fisher and Barry Osborne were joined by 32 stripy Spartans as they both reached their milestones of 250th and 50th parkruns.  Verity was the first to wear the specially designed green 250 cape in Stevenage parkrun and finished in 29:13 whilst Barry completed his 50th parkrun in 23:25.

James McSweeney and Caren Dowsett ran new PBs this week in Stevenage.  James ran in 23:00 whilst Caren finished in 43:37.

(More than forty Spartan parkrun results can be found at the very end of this release).

Fairlands Valley Spartans are into week six of their marathon training plan.  Are you running a Spring marathon?  Whether you want to get round and enjoy; are a first timer; want a personal best or expect to go “Sub Three” the Spartans are the local club for you, there are group training opportunities five days a week.  Have a look at www.fvspartans.org.uk or the club’s Facebook page.

Fairlands Valley Spartans celebrate their champions and a great year in 2018 with their presentation evening, dinner and dance on Friday 1st March.  Have a look at www.fvspartans.org.uk

Spartans at the Love Welwyn 10K