Last week Spartan JOHN NELMS took on a challenge to run seven full marathons in seven days. The week long event is organised by Enigma running and comprises of a 26.2 mile course each day, looping around one of three lakes in Milton Keynes. 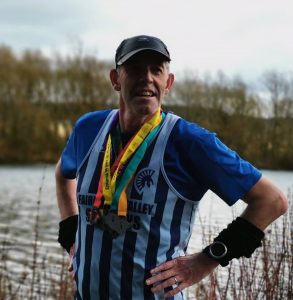 John completed all seven days with his finishing times between 4 hours 10 and 4 hours 27 over the week.

John, who is the FVS ultra marathon captain and completed his 50th lifetime marathon on day one of this week said “The weather was not kind to us this week with high winds every day and rain on five of the seven days.  “I had great support from fellow Spartans both running with me on three days and sending messages of encouragement after each finish.  Once again the Spartan family pushed me on when the going was tough and I’m so glad I’m a member of this brilliant club”

In what was John’s last event of the week long series ADRIAN BUSOLINI won Enigma’s “Buff Week at the Knees” 17 lap marathon round the Milton Keynes lakes in a new personal best (PB) of 3 hours 18 minutes.

STEVE GREEN finished in 3:53:32 supporting John Nelms on some laps.

(Thanks to Anne Tryssesoone for photos)

Just six weeks from the London Marathon and Spartans were running in twenty mile races in Milton Keynes, Nottinghamshire and Oundle.

KAREN BROOM ran the Oundle 20 on Sunday.  She said it was on a scenic undulating course around country lanes around the Northamptonshire villages of Fotheringhay, Nassington, Yarwell and King’s Cliffe.

Fourteen Spartans ran twenty at Milton Keynes.  JAMES KAY was quickest with 2 hours 29 minutes 10 seconds with TIM SABAN also under two and a half hours with 2:29:19.

James Kay said, “It was my first 20 mile race and longest run to date, so I am pleased with the chip time of 2:29:10 and 7:28 min/mile pace.  The last few miles were tough running into the wind at times and up a large hill, but hopefully this bodes well for London at the end of April.

It was great to meet up with all of the Spartans running before the race.  It was also great to run some of the race with Tim Saban, who I ran my first 10km mid-week league race with last year and who has given me a lot of encouragement over the last year.  Thank you Tim!  It was great we both managed sub 2 hours 30 mins for the 20 miles yesterday.”

This was also RICHARD COWLISHAW’s longest run so far.  He finished in 2:42:24.

(All fourteen MK20 times can be found near the end of this release).

YUKO GORDON was a lone Spartan in the Notts 20, which was their inaugural race.  The start and finish was at the beautiful Holme Pierrepont National Water Sports Centre.  The course was picturesque and interesting.  Apart from the chilly cold wind and water puddles along the off road paths, the rest of race was perfectly organised.  The whole route was closed to traffic.

“Gold and Silver” at Welwyn 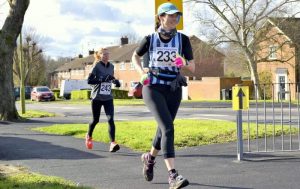 PAUL MAQUIRE said, “Basically there was lots of mud everywhere!”  He finished with 1:45:01 in 142nd place

MARK GOODWIN and JIM BROWN were first and second in the men 60 plus competition.  Mark came in with 1:44:56.  Jim had another hard day in the half marathon office.  After cutting this year’s time by seven seconds at Berkhamsted two weeks ago he managed to get past another “Vet 60” in the second half of the race scrape off another nine seconds on Sunday.  His aim was to maintain a marathon training average of 8 minutes 30 seconds per mile which he did by 19 seconds with 1:51:02 despite sliding on liquid mud on two occasions. 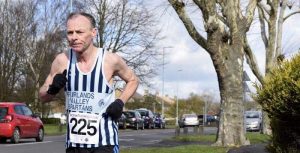 ANDREW SMITH finished with an official time of 1:50:40

It was FIONA CLARKE’s first half marathon as a Spartan, and only her second ever. She said, “I finished in 2:02:37 with VERITY SUTTON-FISHER as my unofficial pacemaker and smashed my previous PB by 18 minutes.  I couldn’t have done so well without Verity!”

(Thanks to Nichola Durent’s Dad for photos)

(Times for all Spartans at the Welwyn Half can be found near the end of this release).

After last year’s cancellation due to snow, just three hours before the start, this year’s Reading Half marathon was run in glorious sunshine.  It was a well organised event, and despite there being over 13000 runners, queues were pretty short and the race went smoothly.

Stuart said that this race was billed as a flat and fast race, and he was very surprised to find a number of hills and very twisty bits which sapped his energy, but was still very pleased with the result.

PAUL HEWETT ran 1:23:03 at the Brentwood Half Marathon on a pretty tough course.  He said, “This new personal best sets me up nicely for the Manchester Marathon in three weeks.”  Paul was 28th overall out of the 2,349 finishers.

An undulating and windy Brentwood Half Marathon was completed by Spartan DAN HUKIN in a 1:25:42.  He was 59th overall and ninth in his age group.

The fastest from Fairlands at the Hampton Court Palace Half Marathon was KAREN ELLIS in 1:52:59.  She was 875th out of the 3,450 runners in this large event which finished in the palace.

Her 49 minutes 30 seconds was a PB and the first time she’s beaten 50 minutes.

THOMAS SAUKA did the Ashridge Boundary Run for the first time, it was very muddy and windy tough conditions but he likes this sort of thing so that didn’t deter him.  Tom finished 109 out of 381 starters in a time of 2:31:29.

After two days of rain, the sun came out for the Cyprus Marathon.

The marathon was a point to point affair, starting at Aphrodite’s birthplace, and finishing beside Paphos Castle next to Paphos harbour.

Heat is of course the big killer when running a marathon, and ROGER BIGGS struggled over the second half to finish in 5:46:42

Strong winds didn’t hold back the 26 Fairland’s Valley Spartans’ who attended Parkrun events this weekend. STEVEN DOBNER completed his 60th Parkrun in a PB time of 23 mins and 35 secs on the Stevenage course, where he was joined by CHRIS HOLLAND completing his 80th even in 24 mins and 57 secs. At the same event, RICHARD SPRINGALL was 4th overall in a time of 19 mins and 21secs and DANNY SCANLON and DEAN CARPENTER finished 13th and 17th, respectively, in times of 21 mins and 05 secs and 21 mins and 30 secs.

Fairlands Valley Spartans are into week eleven of their marathon training plan.  Are you running a Spring marathon?  Whether you want to get round and enjoy; are a first timer; want a personal best or expect to go “Sub Three” the Spartans are the local club for you, there are group training opportunities five days a week.  Have a look at www.fvspartans.org.uk or the club’s Facebook page.

Spartans at the Welwyn Half Marathon:

Spartans at the Brentwood Half