It was waves and ripples again but another real 10K race on Sunday.  However the temperature had dropped about twelve degrees in a few days and the breeze was up in the exposed parts of the course at Lee Valley Run Fest.

Nine Spartans enjoyed the event.  14th overall and with a new personal best of 36 minutes 24 seconds was ADRIAN BUSOLINI.  He said his last actual 10K race was a Midweek League event some 15 months ago, where he just managed to squeeze out a sub-40′ – making this a three-and-a-half minute improvement.

DANNY SCANLON (pictured above) finished the Lee Valley 10K in 40:52 which is around 50 seconds quicker than the St Albans 10K last month.  He said it was another well organised Active training world event.  He was 63rd overall. 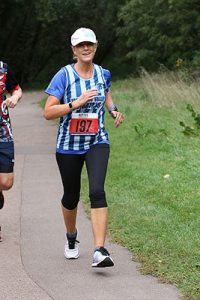 NICOLA ANDERSSON (photo left) ran a new personal best (PB) in the Run Fest at Lee Valley10K, one Sunday.  She said, “It was very cold but a lovely route with not too many hills.  I signed up for this only a couple of days ago all thanks to a suggestion from another Spartan.  I wouldn’t have run it otherwise as I was quite apprehensive at first.  With socially distancing multi starts it was something of a proper first time race after a few virtual races I’ve ran this year.”

The skilfully arranged waves and ripples arrangement meant runners went off six at a time and were kept two metres apart before they started.

Spartan JOHN HARRIS ran the Virtual Tring 50k Ultra Marathon event on Sunday.  He went through the marathon distance in 4 hours 9 minutes 50 seconds and continued to finish the ultra in 4:59:14.

MARTIN DUDLEY got the Spartan ball rolling in the virtual Standalone 10K with a time of 50 minutes 33 seconds on Sunday.

More Than A Thousand Marathons In Virtual Relay

FVS have visited the four Twin Towns of Stevenage and continue to run in some of the world’s iconic marathons in their amazing virtual relay.

By Sunday morning the total so far was 30.377 miles in 118 days.  The relay will continue until 4th October, the day of the virtual London Marathon.