Sixty seven Fairlands Valley Spartans got 2019 off to a great start as sixty five of them joined CALLIE CHAPMAN and STEVE DOBNER running 5K in Stevenage as they celebrated their fiftieth parkrun.

A little further south JIM BROWN and PENNY SCHENKEL began the New Year in great form as they ran their fastest 10K races in more than twelve months at the Serpentine New Year’s Day 10K in Hyde Park and Kensington Gardens.

Jim said it was a good way to blow the cobwebs away.  He thought he was struggling but then saw his time at the first kilometre marker and thought let’s go for it despite residual tiredness left from the Buntingford ten mile event on Sunday.  He said there was a bit of a northerly drift to contend with but it actually helped for the last mile which was along the east side of the Serpentine.

TIM ROBINSON went a lot further.  On New Year’s Eve he ran the Flitch Way Marathon.  The marathon starts at Braintree in the Great Notley Country park and follows an out and back trail route along the disused railway track towards Bishops Stortford.  Although the route sounds fairly flat the track continually rises and drops over its length.  There was good support at the two ‘railway station platform’ cafés but for the most part fellow runners were the only company.  He came in with 5 hours 1 minute 24 seconds, the last Spartan marathon of 2018. 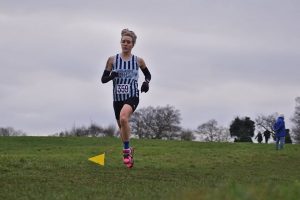 Only 88 finished the senior women’s race which was over eight kilometres.  NATALIE LAWRENCE won County BRONZE in third place with a time of 30 minutes 36 seconds.  RHIANNON GRIFFIN had a great time and beat her previous time on the same course by five minutes with 39:05, she was 54th.  JULIE SHADBOLT and PENNY SCHENKEL completed the four woman team in 83rd with 45:44 and 86th in 48:55.  They were 13th team out of 18 and had a reserve, SHARON CROWLEY who came in after 51 minutes 22 seconds.

The senior men, that’s age 20 and over, had to run three laps or about 12 kilometres.  Although they were missing some of their faster runners they were determined to finish with a complete team of at least six men. 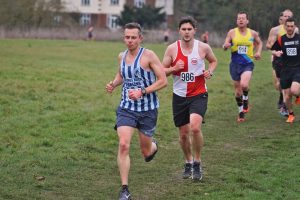 59th out of 150 PAUL HEWETT was first in for the Spartans in 45 minutes 21 seconds; then came RICHARD SPRINGALL 88th in 47:28 and PAUL SHELLEY 115th in 52:07.  THOMAS SAUKA ran a well paced race to cut his time by about ten minutes for the same event, he was 134th in 56:44.  One of the oldest in the race and decades older than many JIM BROWN was battling to avoid last place for the first two laps but overtook a handful on lap three to come in with 145th in 61:56 four minutes quicker than his last race on this course in 2015.  TIM ROBINSON made it team complete and smiles all round at 146th in 62:39.  Tough but satisfying and recommended for next year.

The next cross country race for the club will be a league race at Watford on Sunday 13th January.  Dozens of Spartans are expected for that event.

Spartan of the Month

SOPHIE COWAN was awarded Spartan of the Month for December recognising her work which included organising the Stevenage Half Marathon and the cross country league fixture in Fairlands Valley Park.

Lots of Spartans took advantage of being able to run two parkruns on New Year’s Day.  There were plenty of options with start times of local events staggered to allow this.  There were 67 Spartans who made up the 441 record breaking turnout at Stevenage.

So who did the double?

Congratulations to Michael O’Keefe running his 99th and 100th parkrun on New Year’s Day.  Congratulations also go to Callie Chapman and Steven Dobner who completed their 50th parkruns both at Stevenage.  Steven was at Panshanger for his 49th parkrun at 9 am.

There was another bumper turnout at Stevenage parkrun on Saturday with over 400 runners.  There were PBs for James McSweeney (23:07) on his 49th parkrun.  First Spartan man was Danny Scanlon (20:26).  Kerry Flain finished his first Stevenage parkrun in 22:39.

John Roxborough ran at Victoria Dock in London (near the ExCel) finishing in 21:03.

Rowena Rutledge was at Gunpowder and ran 27:59.

Full Spartan results for all parkruns can be found at the end of this release.

A total of 441 runners took part including 67 Spartans.