After our scorching summer it’s maybe hard to remember that the Welwyn Half Marathon due to be held on 4th March was cancelled due to snow and ice.  Well it was re-arranged and held on Sunday.

All seven Spartans beat the two hour barrier and DANNY SCANLON edged ever closer to the 1:30 mark with his new personal best (PB) of 1 hour 31 minutes 15 seconds.  He was 37th out of the 453 finishers.  MARK GOODWIN won again for Fairlands Valley taking the male 60 plus (MV60) title with 1 hour 43 minutes 48 seconds. 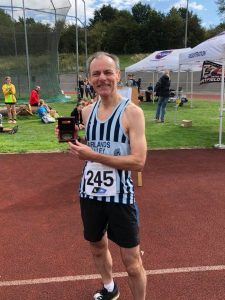 ANDREW SMITH was 207th in 1:52:59 and NEIL ROBINSON 244th in 1:57:18.  Oldest Spartan in the race JIM BROWN was never going to be as fast as his satisfying run at Bedford a week earlier but was pleased to get his weary body round this fiddlier course in 1 hour 50 minutes 46 seconds.

Roger’s remarkable recovery continues.  Not long out of his hospital bed he’s just done two marathons in one weekend.  He was staying with an Irish friend for the Dundalk Marathon on Sunday, so he thought!

Only a few days before, it was suggested that they add in the ‘Beast from the End’ Marathon on the preceding day in Carrickfergus (Northern Ireland).  Sitting on 898 marathons meant that this double would now be marathons 899 & 900!

ERICA GRAYSON ran a new personal best of 26 minutes 11 seconds at the Hatfield 5K on Wednesday evening.  JENNY GARRETT only missed her PB by four seconds with 24:59.  GRANT RAMSAY was the fastest from Fairlands, he was fifth in his age group and 18th overall with 17:22.  YUKO GORDON won the women 65 plus category with 22 minutes 13 seconds and an incredible age related score of 90.5%.  Club Treasurer HAZEL SMITH squeezed under 24 minutes with 23:56.  JIM BROWN said he completely overcooked the first two kilometres after a good half marathon only three days before but hung on for 25 minutes 6 seconds.  CALLIE CHAPMAN came in with 28:29; MICHAEL ANDREWS with 29:54 and ROGER BIGGS in 30:45.

There were 192 finishers.  The final Hatfield 5K races for 2018 will be on Wednesday 19th September and Wednesday 3rd October.

Steve Green said he had never to use the crowd support so much before to get him through a run.  But the great north east folk helped his tired legs finish this year’s Great North run in 1:39:44.

He added Isabel ran an fantastic 1:44:05 despite lots of weaving, she was not far off her PB (personal best) and ensured she had a huge smile for the finish photographers.

The Great North Run was his first half marathon since failing to finish one in June so NICK GILL had one aim….. FINISH!  Despite the hot weather and some hip pain he got round in 2 hours 8 minutes 16 seconds but really could not care less about the time.

This year a record 43,700 runners started what is one of the most amazing half marathons.  The race was won by Mo Farah in 59 minutes 27 seconds.  Many good club runners would be pleased to do that for ten miles!

On Wednesday, Simon Jackson and Andrew Patterson ventured over to Watford for the Open Track Meet where they took part in the 1500 metres. Neither of them had run a track race for a number of years so they tucked in for the first few laps in the main group and pushed on with 500m to go.  Andrew finished in fourth in 4:31.2 and Simon eighth in 4:34.3.

DAVID BOWKER said he didn’t have a good day at the Cambridge 10K.  He got round in 44 minutes 4 seconds but said it was an awful course, there was a road crossing or tight turn every few hundred yards, not for him.

Three Spartans took part in this year’s Chiltern marathon where up MEANS UP with 3,193 feet of ascent this year.  THOMAS SAUKA came in with 5 hours 30 minutes; PAUL HOLGATE with 7 hours 10 minutes and MIKE NEWBITT in 7 hours 30 minutes.

On Sunday Spartans TIM ROBINSON and PAUL WHYTE took part in the inaugural Baldock Rat Run 5K.  Organised by Sports Therapy 4U, the route started in Whitehorse Street and headed out on a loop to Norton Mill via a dark foot tunnel under the railway and along trails on the nature reserve then back to the high street through the tunnel.  The course incorporated narrow trails, steps, kissing gates and at one point ducking under a fallen tree.

Parkrun Round Up Saturday 8th September

Five Spartans travelled further afield this week including Natalie LAWRENCE who was first lady at Bedford in 18:31.