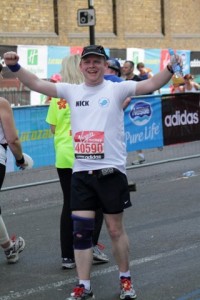 Nick joined the Spartan’s in October 2009, two weeks after he completed his first 10k and shortly before his 40th birthday  –  “a different kind of midlife crisis”.  His aims to start with were just to get fit and improve his health, but since joining the Spartans he has run in the London marathon, numerous half marathons including Peterborough and Edinburgh and Nick even make his international running debut in the Texas half in 2012 (but he doesn’t like to talk about it much!)

Nick introduced the Spartans to the now infamous tradition of the CBF, has joined the coaching team, gained himself a new nickname of ‘Gadget’, mastered the art of wearing his pants OVER his trousers – and of course made numerous good friends along the way.   Nick was appointed Men’s Captain in November 2012, a position he held for 2 years.

Nick’s greatest enjoyment is helping fellow Spartans reach their goals whatever they are. He currently works as a Business Analyst and is married with 2 daughters and when he is not running or gadget shopping he enjoys football (although being an Arsenal supporter that is diffcult!) and darts.