In a last minute and smoothly organised relocation the Hatfield Five race, already delayed from November, took place on the Drift Limits car racing circuit at Bovingdon, on Sunday.

Seven Spartans enjoyed a flat four lap event though the course was a bit exposed to the wind.  DANNY SCANLON improved his personal best by 1 minute 17 seconds by finishing in 30:43.  He was 51st of the 324 finishers. 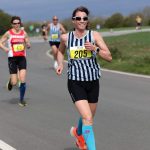 SUZY HAWKINS set a new club record for women aged 40 plus with 32:53 and 76th place.  Just two positions behind and chasing came BRIAN WHITE in 32:58.

In the second of the three waves YUKO GORDON won the women 70 plus category overall with 37:40.  After struggling a bit last week JIM BROWN was happy with 40:44.

KEN JUDE said it was the first time he had worn his Spartan stripes since January 2020 and it was great to be at an event again.  He finished in 42 minutes 48 seconds.

For reasons nothing to do with sport it was a bit of a slow week for PENNY SCHENKEL in the Spartans Race Around England but nevertheless she clocked up another 122 kilometres to reach St. Briavels in the Wye Valley Area of Outstanding Beauty (AONB) close to the Welsh Border on 2727 kilometres, 91.8% done and only 253 kilometres from the finish line in Bristol.

Even more pre-occupied JIM BROWN managed only 66 kilometres but he is holding onto second place and is in the Lake District AONB with 2279 kilometres done.

BRIAN WHITE is third and at Seaham in Durham on 1,984 kilometres.  The Spartan team of fourteen have nearly reached a total of 20,000 kilometres, they are on 19,823.

SHARON CROWLEY is passing Skipsea Sands Holiday Park in Yorkshire with 1815; KEN JUDE is in Gorleston approaching Great Yarmouth on 1424.

Mother and daughter CATHY CRAIG and HAZEL SMITH continue to entertain with Hazel closing the gap again.  Cathy is on 1378 kilometres and is in Sizewell, Suffolk with Hazel on 1372 in Thorpeness.  JON SYPULA is back up to eighth.  He has crossed the Thames and is in Tilbury.

The virtual event started in Bristol and is following the coasts and borders of England in an anti-clockwise direction.

In addition to those using the same effort to record Fly 5K times on Saturday MARIAN MORLEY ran a (not) parkrun 5K in 28:34 and on Sunday JIM BROWN improved to 25:09.