Reece Mac McCullagh did his first 5K on New Year’s Day 2018 (yes this year), found out he enjoyed running and hasn’t looked back.

He has already progressed to ‘long distance’ completing two 50K races in the summer and then on Sunday finished the 100K Chiltern Ultra. 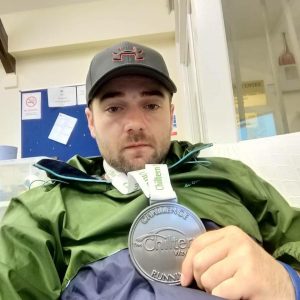 JOHN NELMS, who was participating in the same event, said, “I’ve been running ultra distance for six years and I’ve never seen such determination and fight through mental and physical barriers as I saw from Reece yesterday.  And he ran 15 miles without socks!!!!  An awesome achievement my friend and a pleasure to run with Reece in the rain.”

GRANT RAMSAY is the British (M45) 3000 metres Steeplechase Champion.  He won the title at Birmingham on Sunday in 11 minutes 22 seconds.

Grant said he had a nasty fall at the congested water jump on the first lap.  He lost around 20 metres on the lead runner but pulled it back.  He had slipped on the wet barrier (despite wearing spikes) landing on both knees.  The Irish runner who he was with him fell also!  He managed to get back up, regain composure and come from behind to take the national title.

YUKO GORDON was another Spartan that fell but went on to win.  She ran the Downham Market 10K in 45 minutes 55 seconds for 50th overall, 5th woman and WINNING the women 65 plus category.

She had a bad fall after 9 km mark, lost several positions but says it was a very well organised inaugural race.  There were 375 finishers.

JAMES McSWEENEY “chased the sun” on Wednesday night.  He finished the Chase the Sun 10K in Brockwell Park, Brixton in 51 minutes 26 seconds.  He says it was tough and consisted of three laps around the park with three big hills on each lap.  James said there were nice views of London after the last hill on each lap but thinks he forgot to look after the first lap.

More than 220 people have already entered the Stevenage Half Marathon which will be on Sunday 4th November.  This superb local event is organised by Fairlands Valley Spartans.  Don’t miss out.  Enter now.  Go to https://www.activetrainingworld.co.uk/events/2018/11/04/stevenage_half_marathon or via www.fvspartans.org.uk

The Spartan women’s and men’s teams have both qualified for the final East of England (EMAC) veteran track and field championships which will be at the Stantonbury Campus in Milton Keynes on Sunday 23rd September.

Parkrun Round Up Saturday 25 August 2018

James McSWEENEY ran well in Littleport to bring in a new PB 23:12 and Niki PLUM achieved a new PB of 33:17 in Ellenbrook Fields.  Heartwood Forest saw husband and wife team Steve and Isabel GREEN come in 20:24 and 23:45 respectively.