Fairlands Valley Spartans, who are known for their road racing, hosted the fourth and final Eastern Masters Athletic Club League match at Ridlins Athletics Track in Stevenage. Competing against 5 other clubs, most of which mainly concentrate on Track and Field, the women won the match by an impressive fifteen points, securing their position the top of the South West Division of the league. The men’s team lost out on third place on the night due to absent members, missing by only three points.

The Men’s team consisted of CHRISTOPHER WESTCOTT, TIM SABAN and BARRY KING in the 35-49 age group, STEVE MAYFIELD, DAVE STEPHENSON, DAVID BOWKER and JOHN HARRIS in the 50-59 age group and BARRY OSBORNE was the sole 60+ member. 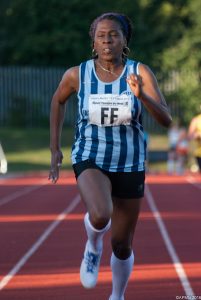 Eighteen Spartans headed to Fairlands Valley for a Saturday morning parkrun fix with several others helping behind the scenes. NATALIE LAWRENCE was first woman finisher in 19:38. OLWEN BATTY finished ninth in a new course PB of 25:07, CAROL PAUL was 12th in 25:29 and VERITY FISHER also notched a new course PB finishing 16th in 26:14

CRAIG HALSEY paid a first visit to Ellenbrook Fields and finished second in a time of 16:44, as the first runner home broke the course record, while at Banstead Woods PETER CARPENTER finished his first parkrun in a time of 31:40.

At Swindon DARREN EMMERSON and CLAIRE COX both completed in 24:07. At Cleethorpes EMMA POULTER came home in a time of 42:40 while at Rutland Water TRACY STILES ran in a time of 28:41. GRAHAM HILL took on the challenge at Wimpole Estate for the first time and completed in 36:06.

Finally TIM ROBINSON became the latest Spartan to reach the 50 parkruns milestone when accompanying his son Oliver round Panshanger Park in 45:46.

Live in or near Stevenage?  Like running?  Fairlands Valley Spartans is your local running club and is on the up!  The club was voted the UK’s Best Running Club in 2010.  It now has hundreds of members and encourages participation by all.  The Spartans have a varied training programme to suit those who want to run 5 kilometres through to full marathons.

The Spartans weekday training sessions are on Tuesday and Thursday evenings.  Go along to the new sports centre at Marriotts School – a Sports College, Telford Avenue, Stevenage (SG2 8UT) at 7p.m.  Up to five running groups go out on training nights – there will be one to suit you!

Try a few sessions before joining.  Membership is only £37 per year, £25 without UKA affiliation.  Concessions are available.  Membership forms are available on the Spartans website www.fvspartans.org.uk  Please ask if you would like a paper copy.  You can also join online.