It was an amazing bumper weekend for Fairlands Valley Spartans including a European Championship win for Grant; Spartan women winning the East of England final; Natalie winning the posh 5K; the Great North Run and loads of personal bests in Cambridge.

Spartan GRANT RAMSAY contributed to a Team Great Britain win at the European Masters Marathon Championships in Wroclaw, Poland at the weekend.  They finished ahead of the Czech Republic and Poland.  That’s GOLD for Grant in the team and individual BRONZE.  He was third in the men’s 45 plus category with 2 hours 44 minutes 10 seconds. 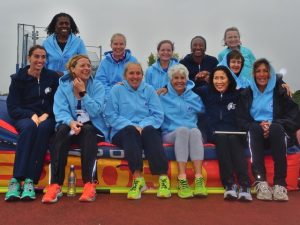 Fairlands Valley Spartans women’s team WON the East of England track and field masters’ championship.  The Eastern Masters Track and Field League final was held at Bedford International Stadium.  Fairlands Valley Spartans Women’s team qualified to take part against the top two teams from each of the four areas by winning their division over the summer.  Having missed out on the final trophy by only half a point last year, they were determined to do better.  After a day of competition the team prevailed finishing twenty one points clear of Marshall Milton Keynes in second and forty ahead of Chelmsford AC who were third.

Yuko Gordon also won the trophy for performance of the meeting, her 3000 metres time of 13 minutes exactly in the race for women over 60 equates to a stunning 94.7% when related to the world record adjusted for age.  In the over 60 age group, Yuko was well supported across the range of events by Iris Hornsey, Cathy Craig and Julie Simmons.

In the over 50 age group, there were multiple wins for Monica Brown in the 100m, 200m, Long Jump, High Jump and Triple Jump, Alison Wood in the 1500m and 800m and Tessa Stephenson in the 400m and Shot Putt.  Julie, running in this younger age group and Sharon Crowley provided good points towards the total.

In the youngest age group for over 35 women, Steph Mayfield was the only winner, taking the Pole Vault, but personal bests from Andrea Westcott along with Suzy Hawkins in only her second track meeting, consistent performances by Christine Lathwell and Tessa dropping an age group in the sprints kept up the scoring.

The meeting had the traditional finish with the relays as the weather deteriorated.  The over 35 team of Suzy, Steph, Andrea and Christine finished third and then the meeting ended on a high for the Spartans with the over 50 team of Tessa, Sharon, Monica and Alison having a clear win.

Four life time and one year’s best for the seven Spartans racing the Greater Cambridge 10K on Sunday plus a second place and a fantastic comeback from serious injury.  STEFFAN FORD was second veteran and 18th overall in 36 minutes 54 seconds.  TIM SABAN beat the 40 minute barrier for the first time with 39:56; KEN JUDE took 1:40 off his personal best with 47:47; LEE PICKERSGILL was first time under 50 with 49:08 and CAROLE SHELDRICK ran a new PB of 54:22.  JIM BROWN ran his fastest 10K of the year with 48:21 and there was an amazing return from serious injury by KAREN BROOM who completed the event in 1 hour 3 minutes 50 seconds.

Running With The Bishop

BEVERLEY HARLOW ran the Great North Run with Ex-Spartan CHRISTINE HARDMAN – now Bishop of Newcastle.  It was their swan song as neither will be running longer distances in the future. On a fabulous day both finished in 2 hours 44 minutes 17 seconds following a run/walk programme.

Spartan NATALIE LAWRENCE won the women’s race at the Posh 5K in Offley.  VICTORIA BRETT who finished in 31 minutes 1 second and CLAIRE HYDE 31:06 said it was a lovely venue, with a shot of prosecco before the start of a very uneven course which became very slippery on the second loop. Great atmosphere. lovely prosecco, canopies and strawberry at the end, with a lovely medal too.

Roger Biggs travelled to Dundalk, on the East Coast of Ireland, on his quest to run a marathon in every County of Ireland. This was the 21st county of 26.

It was a two lap undulating course, which included the ‘Magic Hill’ (a section of road where the it looks like you should be going up when actually you are going down & vice-versa)

Paul Holgate continued his preparations for next month’s Snowdonia marathon by taking part (along with Mike Newbitt) in the tough Chiltern marathon. With over 7,000 feet of climbing and despite a couple of unintended detours along the way, Paul finished in 7 hours 20 minutes and Mike in 7:25.

In other local parkruns MARK GOODWIN finished 26 at Panshanger in 22:44 and BARRY OSBORNE was 17th at Ellenbrook Fields in 22:02.

Finally ROGER BIGGS was in Ireland and limbered up for Sunday’s Dundalk marathon by running Dundalk parkrun in 30:52, notching a top 50 finish.