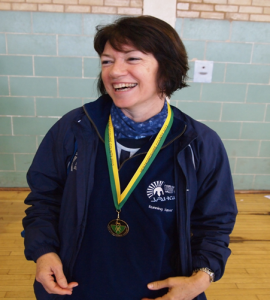 Q. When did you join the club?

Q. Why did you join the club?

A.  I was lucky enough to have received a ballot place in the London Marathon.  I initially had planned to walk it but then thought I should get fitter and run it instead.

Q. Why did you join the coaching team?

A. I was keen to join the team because over the last 20 years I have gained so much from the club that I wanted to give something back.

Q. What are you hoping to do through your involvement in the coaching team?

A. I am hoping to retire in 2012 and so hope to have more time available from then.  In the meantime I am helping Tony Osborne with Group 2 on a Tuesday.

Q. When do we typically see you at training?

A.  I am a regular in Group 2 on a Tuesday and also at the Angel’s sessions on a Saturday morning.

Q. What are your aims in 2011 for your running and/or coaching?

A. As it is 20 years since I started running this year I have entered the Abingdon marathon which takes place on my birthday!!  I will be moving up an age category and may even get myself an anniversary PB, who knows!

Q. Tell us something about you that other Spartans will not know!

A.  My niece is the Olympic javelin thrower Goldie Sayers and I can’t run much on Sunday mornings as I am a church organist.