The heat was record breaking but a fantastic thirty three from Fairlands Valley Spartans completed all 26.2 miles of the scorching London Marathon.  With an official temperature of 24.1 Celsius Sunday’s race clearly beat the previous highs of 22.7 in 1996 and 22.6 in 2007.  Add the heat off the roads and from other competitors the temperature runners experienced was much higher than that.

The Spartans have a wonderful reputation for preparing runners for their first – and subsequent – marathons and did it again this year.

13 Spartans ran for charities and so far their combined total collected for some great charities stands at £34,500!!

And the Spartans have a winner.  YUKO GORDON won the women over 65 category beating 112 others with 3 hours 39 minutes 7 seconds and she was disappointed!  She said:  “I didn’t expect the heat would affect me this badly.  I did not enjoy it at all.  It was a real struggle all the way even before 10 miles.  My mouth was very dry but my stomach would not take any more liquid.  I made a very silly mistake, overpaced for the first 6 miles when cooler and downhill.  My foot and lower shin was cramping for last two miles but I just ignored and ran.  Cramp all over my legs after the finish, so went straight home.  Not feeling great.  Won my age group.”

NATALIE LAWRENCE: Hot hot hot.  Proud to have finished and to do a small personal best (PB) too 3:13:46!!  I am more than content. Plus given the fact I’ve yet again had no more than 14 weeks to prepare post baby.

JAMES KILROY:  My first marathon wasn’t so great as I suffered in the heat and had stomach cramps from half way, but still enjoyed the crowd, the route and the medal.  Massive thank you to Karen Ellis who embodied all that is Spartan teamwork as we ran walked together all the way from half way point and she kept me going for the last 2 miles.  My time 5:31:52

Spartan ANDREW PATTERSON was Mr Potato Head and raising funds for the UK Kawasaki Foundation and making an attempt on a Guinness record.  Despite the heat and the costume he finished in 3 hours 34 minutes 25 seconds.  Andrew said, “It was funny being checked that I had an orange nose, hat and blue boots before being allowed to go to the start line.”

NICKY KUKLYS:  I ran 6.17! So much slower than I wanted – but just so chuffed I finished especially in the heat!  And I kept running – slow and painful but I got there!

GERRY ROSEN: Not sure what to say – two miles in and my knee injury went ape and I ended up literally walking the last 24 miles.  I will be honest with you it was good that I was wearing sunglasses as I was welling up a few times, but the determination to finish so me home in 6 hour 38 minutes I am now able to look people in the eye and say I finished the London Marathon.  No one but no one is going to take away that finishers medal for me.

JIM BROWN said “This was my eighteenth London Marathon and one of the hardest.  I ran in 1996 and 2007, the previous heat record holders, but this was more challenging.  Clearly I’m a lot slower than more than twenty years ago but I saw the first collapsed runner at eight miles and that’s about when I decided to abandon any idea of time or I was not going to finish – and I was in charge of the runners’ coach.  Got across the finish line head spinning and with the lower half of my FVS running vest, shorts, legs and socks covered in blood.  Not a pretty sight.  About half an hour slow due to the conditions but 4:23:50 wasn’t too bad for a Vet65 in the circumstances.”

Spartan SHARON CROWLEY was running her 16th London Marathon.  She finished in 6:37:08 saying maybe she should have stopped at 15! 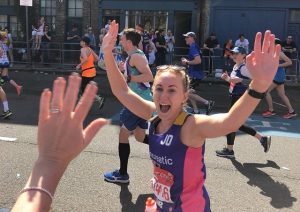 Despite the heat one Spartan managed to beat the magic three hour barrier.  GRANT RAMSAY finished 834 out of more than 40,000 finishers in 2 hours 57 minutes 23 seconds.  Even he reckoned the conditions slowed him down by about 15 minutes.  STEFFAN FORD came in with 3:13:44.

ROB SHAW was the oldest Spartan.  Seventy plus and round in 5 hours 49 minutes with about 8,000 runners behind him.

Dozens of other Spartans helped at the finish.  Without the volunteers there would be no London Marathon.

All the Spartan finishers:

35 Spartans ran the first Handicap 5K of the year on Thursday evening.  The winner was Tim Robinson running a year best time by 3:13 to finish in an excellent 23:39, 2:51 ahead of handicap, closely followed by Nick Gill, 2:35 ahead of handicap in a year best time of 20:25, with Dan McAlpine third in a new PB time of 16:40 and new member Manuel Cosifodo 4th in an excellent 24:34.

Fastest runner on the night was Dan McAlpine with Simon Jackson second quickest in a year’s best time of 17:16 and Paul Robertson third quickest in a new PB time of 20:07.

Total time between the 35 finishers was just 4:47 and only 4:06 from 2nd-34th with 80% of finishers within 2 minutes of their calculated handicap and the other 20% even quicker.

The next handicap is scheduled for Thursday 17th May.

DUNCAN FLOUNDERS ran the Southampton Half in 1:41:57.

At the end of an unexpectedly hot April week, the 19 Fairlands Valley Spartans who headed out to run the weekly Parkrun events demonstrated that the rising temperatures were no barrier to performance. LEE PICKERSGILL and WILLS JENNINGS achieved PB times of 23 mins and 19 secs and 24 mins and 27 secs, respectively, in Stevenage.

Milestone runs took place for IDA LEO who attended her first ever Parkrun, in which she completed the Stevenage course in 30 mins 57 secs, MARTIN WOOD, also at Stevenage, who ran a time of 21 mins 36 secs in his 10th Parkrun outing, and MADELEINE PRITCHARD who finished her 20th Parkrun in 22 mins and 46 secs at the Beckton event. Heading to new venues for the first time DARRYL STEVENS complete the Seaton event in 40 mins and 12 secs and MICHAEL O’KEEFE finish Great Denham in 27 mins in 23 secs.

RICHARD KENNEDY was 14th to finish the Nobles Parkrun event in 23 mins and 16 secs closely followed by NICOLA KENNEDY who was 17th in a time of 24 mins and 49 secs. VERITY FISHER completed the Stevenage course as the 8th woman in 26 mins and 5 secs. Furthermore in Stevenage Martin DUDLEY finished in a time of 22 mins and 23 secs, CRAIG BACON in 22 mins and 49 secs, TIM ROBINSON in 26 mins and 12 secs, JAMES SOUTH in 28 mins and 5 secs, STEVEN DOBNER in 29 mins and 3 secs, SALLY PHILLIPS in 32 mins and 21 secs and LORRAINE SAUNDERS in 34 mins and 17 secs.